COVID-19 FREE download of STRETCHES for the major bodyparts

I have been lucky to have studied with, and learnt from, some of the leading authorities in many of the disciplines that I provide as services. I feel it only right to credit these when I teach and present.

One of those is a man who I encountered when I first started back in 1993 (having served for 5 years in the RAF) and he inspired me to be the best that I can be. This was in reply to a ‘Thank You’ that  I sent to him recently:

Wow…Cain I am truly humbled by and grateful for your words. It means so much to me that you felt this way and I am so impressed to see how you have taken a spark and fanned it into a bright light that is inspiring others and showing them how to transform their health, performance and overall well-being. It takes a lot of commitment, graft and intelligence to achieve what you have. And as much as you remember me, I remember you and your unquenchable thirst for knowledge and that sparkle of enthusiasm in your eyes that showed that you were going to run with whatever you learned. – Stephen Terrass – ex Technical Director at Solgar UK and Founder of Terranova Nutrition

I started working exclusively with Cain from GB Fitness two weeks prior to the NABBA British Championships in 2004 through to the end of the NABBA British Championships 2005 (one full year in which all of the listed titles were won!).  In this time I won many titles from British to World and two Universe titles, without Cains knowledge and pre-competition advice I would have been lost! My training programs, my diet and nutritional advice as well as posing and tanning were all monitored regularly … and all thanks to Cain Leathem I am the multi-champion that I am today. I also completed and passed the GB Fitness Advanced Gym Instructor course that is also endorsed by NABBA and several major fitness governing bodies … so now I am a qualified instructor myself I hope to use the knowledge that Cain has taught me in my own challenges in the future. – Andi Black, 3 x Ms Britain, 2 x Ms World and Ms Universe 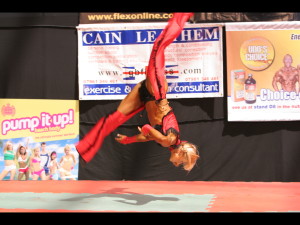 Andi Black mid routine. Winning every show that she entered whilst being trained by Cain.

With his guidance I re-shaped and defined my figure, targeting specific areas for particular improvements. My general health and immune system improved tremendously thanks to his knowledge regarding nutrition and diet supplementation, and the stresses placed upon the body by the strenuous training regime my sport requires.

I have a far better understanding of the body and its responses to stimuli from working with Cain over that year than I gained working with any other coach in the 10 years I have trained as an athlete. His unique range of knowledge, practical application and hunger to learn more make him the number one choice for anyone wishing to improve their fitness or physique. – Julie Crane – International High Jumper and 2006 Commonwealth Games Silver Medallist Cain has a passion and enthusiasm for his subject and has an excellent teaching style which imparts his wealth of knowledge and experience to his students and manages to explain even the most difficult concepts in a way that all can understand. His courses are comprehensive, and robustly examined giving confidence to the student. The scientific reasoning is robust and far exceeds that of other courses. As a Doctor I chose his courses to expand my current practice and knowledge, something that other companies could not offer. – Dr Ray Reehan MBChB BSc

If you know Cain, you can imagine what he said to me, he didn’t mince his words and then simply asked me “Do you want that World record?”

Well, what can I say, within 4 days of seeing Cain and following the correct diet I suddenly, yes suddenly not gradually, got stronger and stronger, in fact I was pushing out power I forgot I had. I was recovering better than ever from each effort, something I had not experienced for the past 15 years or so. I felt 20 again, words cannot explain just how I felt. I was ready to rock, except for one of my “other” problems. I get really nervous before a big event, and even over time, it did not improve, it got worse, so I made a quick phone call to Cain for help before I left for Australia (talk about leaving it for the last minute). He invited me to a NLP session.

Cain gave me positive thoughts beyond what I hoped for and removed the gremlins from my head that had haunted me for 35 years. I was like a man possessed when I was on the start line, totally focussed and up for it.

My strength was through Cain, he made me a new man in a short space of 6 weeks, I went to Australia, I raced, I won Gold, I also smashed the World Record by 7/10th of a second.

My whole experience with Cain has given me a new lease of life and feel age is not a barrier any more. Onward and forward! – David Le Grys – 19 x World Champion and Cycling World Record Holder 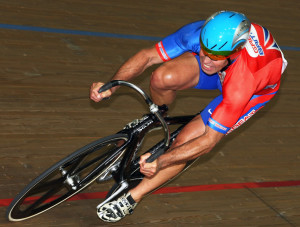 At the age of 16 a was running pretty fast at the 100 metre sprint – 10.76 and I also ran the Belgian record in the junior category in the 200m in 20.80. I was a semi finalist at the Beijing Olympic Games in 2008, but in 2010 it all really went very bad. I started feeling really tired, my performances got worse and worse and was feeling very down and ill. Doctors carried out investigations to see what was wrong, they could not find anything. At the beginning of June 2010 they took blood samples gain and saw that I had Borrelia (also known as Lyme disease) and they started giving me strong antibiotics for two weeks. After the oral antibiotics I crashed completely and got meningitis and I was hospitalised for a week, fighting for my life.

I survived, but I lost my professional contract for running in the 200m sprint for Belgium, but I did achieve a place for the 4 x 400m relay in Belgium. Taking this contract was at that time about surviving financially, as I needed to earn money of course, because I did have a family to support. This turned out to be a BAD decision, as after 6 competitions, my body seemed to shut down again – even worse than before and I was suffering from chronic fatigue syndrome. I lost my contract, I lost my health, I lost everything that I had worked so hard for.

Cain, who was interested in my story, invited me over to Birmingham. Cain asked for all of my blood results, hospital files etc. even before he saw me to review my history… and did an amazing job. Despite the fact they were in Flemish he uncovered issues that others had missed – he was very thorough and explained all to us so that we could understand the information.

From that moment it all seemed to start to get better. Cain gave me a dietary program and supplements to heal and support my system, and also advice how to train, so that I could build up again, instead off breaking down. I work part time now and I work out at 50% of my previous amount of sessions, all centred around quality rather than quantity. BUT I have had the best indoor season ever at the 60 metres this year, and in such a short time since meeting Cain. I have ran almost my lifetime personal best and I feel great. – Kristof Beyens, International Sprinter 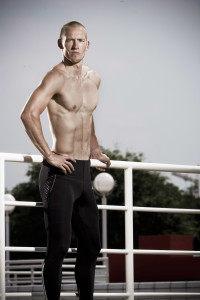 World class sprinter, who came to work with Cain all the way from Belgium.

Cain…where do I start? I have so much to thank you for. Competing in the WBFF European Championships would only have been a dream BUT you brought the opportunity to me. I have learnt so much from you and you have filled me with so much motivation and belief. Thank you for your patience, for not giving up on me, for your continued support and for EVERYTHING that you have done  – from all the travel arrangements to driving, cooking and even walking 6 miles in the cold rain of Iceland to make sure that we had chicken to eat! – Rhian Adams – Ms. Wales, European Championships Runner Up It was November 2007 when I first met Cain, referred by a friend I travelled up to Birmingham from London for some advice on how to get ‘fit’…if you know Cain, you will never use the word ‘fit’ as a goal (I learned this the hard way LOL). I’m not sure if Cain realises but it was this first meeting where he literally changed the way I looked at food, training and inspired purpose to these for me, he literally blew me away with his wealth of knowledge and ‘guru’ like status! It was a full year later before I got my butt back to Birmingham and completed Cain’s Diploma in Advanced Nutrition followed by the Advanced Gym Instructors course. It was at this point we began my journey and transformation into a Ms Figure competitor…and WINNER!! 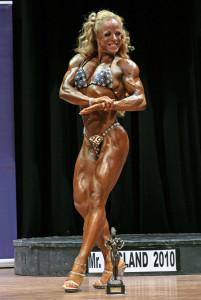 Silvana – who went from GB Fitness student to Ms. Universe. With the right help Dreams WILL Come True! 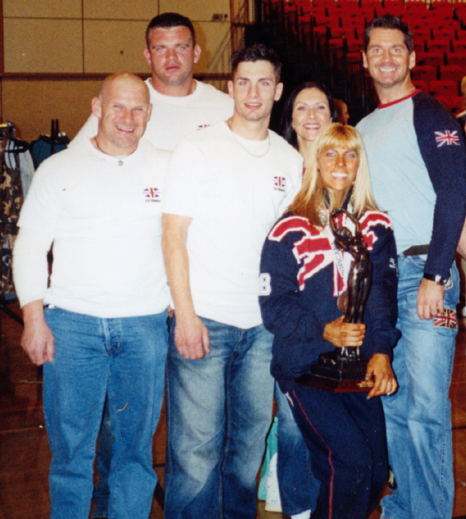